Professor of Marketing Ross School of Business University of Michigan

Prof. Venkat Ramaswamy is a globally recognized thought leader, idea practitioner, and eclectic scholar with wide-ranging interests in innovation, strategy, marketing, branding, IT, operations, and the human side of the organization.

Venkat's award winning book in 2004, ‘The Future of Competition’, co-authored with the late C.K.Prahalad, introduced Co-Creation as a revolutionary concept. It provided a new frame of reference for jointly creating value through experienced environments and called for a process of co-creation—the practice of developing offerings through ongoing collaboration with customers, employees, managers, financiers, suppliers, partners, another stakeholders.

Venkat's 2010 book, ‘The Power of Co-Creation’(with F. Gouillart) showed how enterprises in over twenty industry sectors—from automotive products, consumer durables, capital-intensive equipment, and industrial goods and services, to fast-moving consumer goods, retail, media, entertainment, and travel, to information technology and professional services—were all leveraging platforms to create new interactions with people everywhere in the system and how new forms of value could be created together with individuals through a focus on human experiences

In 2014, Venkat published ‘The Co-Creation Paradigm’ (with Kerimcan Ozcan), a clarion call to action-to help create a new world of possibilities together. It argued that ultimately, all of us will have to see, think, and act differently-not just as practitioners or academics but as individuals in economy and society-thereby rebalancing the relative influence of the individual and the institutions of plural, public, and private sector enterprises. 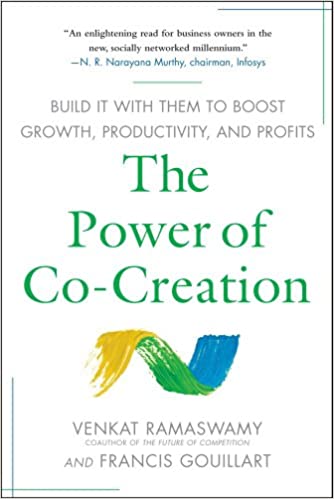 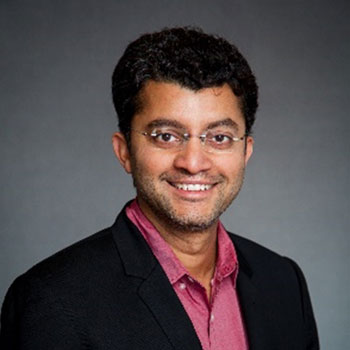 Anindya Ghose is the Heinz Riehl Chair Professor of Business at NYU’s Stern School of Business and the author of the award winning and best-selling book TAP: Unlocking the Mobile Economy which is a double winner in the 2018 Axiom Business Book Awards and has been translated into five languages (Korean, Mandarin, Vietnamese, Japanese and Taiwanese). He is the Director of the Masters of Business Analytics Program at NYU Stern. He is a Leonard Stern Faculty Scholar with an MBA scholarship (the ‘Ghose Scholarship’) named after him.

In 2014, he was named by Poets & Quants as one of the Top 40 Professors Under 40 Worldwide and by Analytics Week as one the "Top 200 Thought Leaders in Big Data and Business Analytics". He is the youngest recipient of the prestigious INFORMS ISS Distinguished Fellow Award, given to recognize individuals who have made outstanding intellectual contributions to the discipline with publications that have made a significant impact on theory, research, and practice. In 2017 he was recognized by Thinkers50 as one of the Top 30 Management Thinkers globally most likely to shape the future of how organizations are managed and led in the next generation. Professor Ghose has received 16 best paper awards and nominations; the National Science Foundation’s CAREER Award; and faculty research awards from Google, Microsoft, and Adobe. His opinion pieces and research have been featured on BBC, Bloomberg TV, CNBC, China Daily, The Economist, The Economic Times, Financial Times, Fox News, Forbes, Knowledge@Wharton, Korean Broadcasting News Company, Los Angeles Times, Marketplace Radio, MSNBC, National Public Radio, NBC, Newsweek, New York Times, New York Daily, NHK Japan Broadcasting, Quartz, Reuters, Time Magazine, Washington Post, Wall Street Journal, Xinhua TV.

He has consulted in various capacities for Apple, Alibaba, Berkeley Corporation, CBS, Dataxu, DFS Group, Facebook, HR Ratings Mexico, Marico, Microsoft, NBC Universal, OneVest, Samsung, Showtime, Snapchat, Verizon, Yahoo, 1-800-Contacts, and 3TI World, and collaborated with Adobe, China Mobile, Google, IBM, Indiegogo, Microsoft, Recobell, Telefonica, Travelocity, and many other leading firms on realizing business value from IT investments, internet marketing, business analytics, mobile marketing, digital analytics, social media, and other areas. He also serves on the Board of Directors of many start-ups in the US, UK, India, Hong Kong, South Korea, Singapore, and China including Lucidity, Tamoco, Adrealm, Leverage Edu, Co-FoundersLab, Ibus Networks, ZeroWeb, and EywaMedia amongst others. He teaches executives, CIOs, and CMOs in the U.S., Asia, and Europe on how to monetize the digital economy using Artificial Intelligence. He serves as an expert witness for IT and consumer related litigation cases and is affiliated with Cornerstone Research and The Analysis Group. He has provided expert testimony in multiple trials and depositions involving Apple, Alibaba, Facebook, Snapchat, Verizon, Yahoo, Federal Trade Commission, amongst others and has experience in securities, intellectual property, antitrust and competition, copyright infringement and merger appraisal cases involving industry domain knowledge, marketing, machine learning or statistical issues. He is a frequent keynote speaker in executive gatherings and thought leading events globally on the topic of mobile economy and has given more than 250 talks to global audiences. He is an avid high altitude mountaineer, and has climbed extensively in North America, Europe, Asia, and Africa. 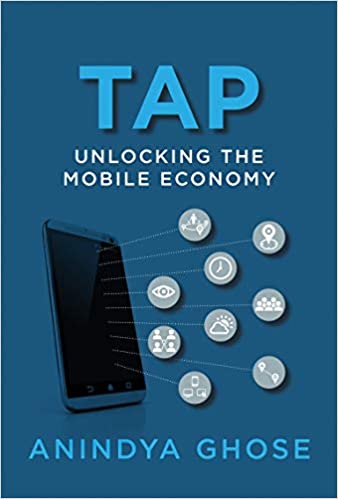 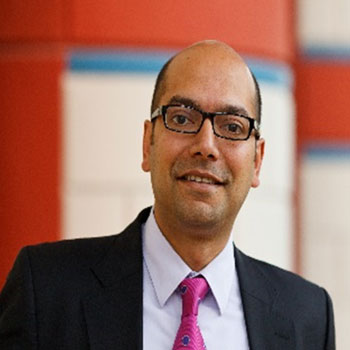 Jaideep Prabhu is Professor of Marketing at Judge Business School, University of Cambridge. He has published in and is on the editorial board of leading journals such as the Journal of Marketing.

He has appeared on BBC News24, BBC Radio 4 and Bloomberg BusinessWeek, and has been profiled in BusinessWeek, BBC World Service, The Economist, The Financial Times, Le Monde, The New York Times and The Times. He has consulted with executives from Bertelsmann, Barclays, BP, BT, GE, IBM, ING Bank, M&S, Pearson, Roche, Raymonds, Shell, Siemens, Unilever and Vodafone.

He is the co-author of Jugaad Innovation: Think Frugal, Be Flexible, Generate Breakthrough Growth, described by The Economist as “the most comprehensive book yet” on the subject of frugal innovation. His follow up book Frugal Innovation: How to do More with Less was published in February 2015 and won the CMI’s Management Book of the Year Award 2016. His most recent book Do Better with Less was published by Penguin Random House India in April 2019. 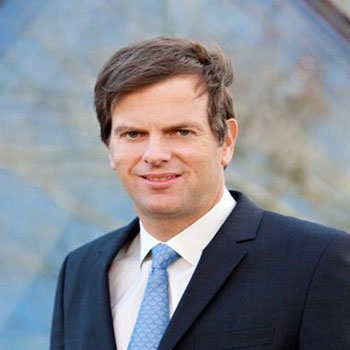 Stephen Wunker is a leading consultant on innovation, with a particular focus on redefining industries and creating new ones. Wunker led development of one of the world’s first smartphones, has built and sold several successful businesses, and advises companies worldwide on creating and executing bold plans for growth. He has worked across hundreds of companies on five continents.

Wunker is a noted author. Aside from his books, he also writes for Forbes, Harvard Business Review, The Financial Times, and other major outlets. His media appearances include Bloomberg and BBC television, and he has been a guest lecturer at Dartmouth’s Tuck School of Business.

As a leading consultant on growth and innovation for the past dozen years, Wunker was a long-time colleague of Harvard Business School Professor Clayton Christensen in building up his innovation consulting business, Innosight, where he led three industry practices. He has co-written two articles with Professor Christensen and helped to put together his book on healthcare The Innovator’s Prescription. He also spent several years consulting at Bain & Company in their Boston and London offices. Wunker founded New Markets Advisors in 2009 and advises innovative companies including Nike, PepsiCo, Microsoft, Mahindra, and Cognizant. 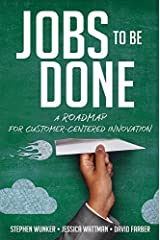 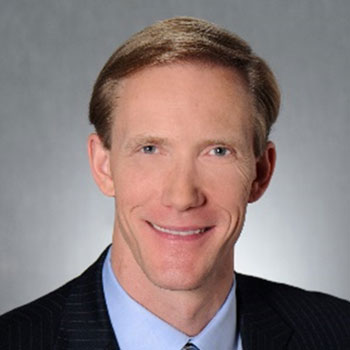 Michael E. Raynor is a Director in Monitor Deloitte. He is a subject matter expert on the topics of corporate financial performance, strategy, innovation, and risk and uncertainty. Raynor shares his research and findings with executives and management teams through keynote lectures, workshops, and consulting projects in a wide range of industries with companies from around the world.

He has collaborated with Deloitte colleagues on projects with many high profile companies, such as General Electric, AT&T, Johnson & Johnson, and Mastercard, and with dozens of leading companies in industries including pharmaceuticals, manufacturing, electrical utilities, media and financial services.

Raynor’s most recent book, The Three Rules: How Exceptional Companies Think (Portfolio), is an investigation into the drivers of long-term superior corporate performance. It was named 2013’s “best business book of the year” by Toronto’s Globe & Mail.

On the topic of innovation, Raynor was co-author with Professor Clayton M. Christensen of The Innovator's Solution (2003), which was on The Wall Street Journal and The New York Times bestseller lists, and sole author of the best-selling The Innovator's Manifesto, released in 2011.

On growth, risk and uncertainty, Raynor’s The Strategy Paradox (2007) was named by Strategy + Business as one of its top five picks in strategy, and BusinessWeek named it one of that year’s 10 Best Business Books. He has also published extensively in a wide variety of journals including The Harvard Business Review and the Strategic Management Journal.

In addition, Michael has taught in the MBA and Executive Education programs at the Richard Ivey School of Business at the University of Western Ontario (Ivey) in London, Canada and at the IMD Business School in Lausanne, Switzerland. Michael has a doctorate from the Harvard Business School, a master's degree in business administration from Ivey and an undergraduate degree in philosophy from Harvard University. He lives in Mississauga, Ontario, Canada. 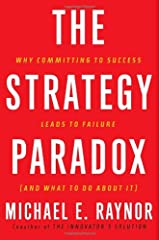